A true account of the long, rough, innovative journey to…validation
By
Michelle Fisher, Founder and CEO of Blaze Mobile
September 10, 2014

In 2005, when I started my mobile technology company, I was excited about figuring out how to use Near Field Communication (NFC) for mobile payments, ticketing, coupons, and other mobile applications.  Most people I spoke to about NFC thought I was talking about the National Football Conference. Now, nine years later, the term, NFC, is well known throughout mobile and tech industries, and Apple’s recent announcement has validated NFC for use in mobile payments.

This account is not so that I can shake my finger and say, “I told you so!” I am sharing my experiences to shed light upon, and challenge the existing practices of too many of the Silicon Valley elites – institutions and individuals. My hopes are that more support for exciting ideas will lead to faster and greater innovation.

Because of my passion for innovation and perhaps also as a woman,  I was concerned about ease of use, convenience, and reliability when it came to shopping, using coupons, and tracking loyalty points.  Therefore, the concept of simply waving my phone to do all of these things “automagically” would be a dream come true.  So, I decided to start a software company to make this dream a reality

Vinod Khosla’s (@vkhosla) statement is absolutely true; “The future will be built by those who will take risks and action to invent the world they want.” In addition to taking the risks associated with any new venture, when you are early in a market, there is also a lot of marketplace evangelism and education that must take place. For example, anytime we went out to test our mobile wallet, customers and cashiers would ask us a lot of questions about what we were doing.  So, we developed small, business card sized information flyers, (see pictures below) which summarized our software (it wasn’t called an app back in those days) to give to both cashiers and customers. Yes, we were even educating cashiers. .

Our very first shopping trip to test NFC mobile payments was at was in February, 2006 at a 7-Eleven store on University Avenue near our office in Berkeley, CA. I considered buying some champagne to celebrate the occasion, but reconsidered after thinking that buying alcohol would not make a good first impression to our stakeholders, and angel investors.  I opted for flavored bottled water. I waved my Nokia 3220 with embedded NFC phone and our wallet near the POS device, the terminal blinked, beeped, and spit out a paper receipt. Nevertheless, the cashier replied, “When are you going to pay?” After I explained what I had done, she said, “Its so easy.”  After my two colleagues did the same thing, she kept repeating, “Its so easy. It’s so easy.” even as we were leaving the store (see pictures of our first shopping trip and a few more below)

Another memorable test was at the Jack In The Box drive thru on Telegraph Avenue in Berkeley. My niece and nephew were visiting me, and I wanted to impress them with this technology. After I waved my Nokia 3220 with embedded NFC phone and our wallet  over the POS device attached to the exterior of the window, the cashier looked so surprised and asked , “Am I being punked?” I’m not sure if my niece and nephew were impressed, but we all got a good laugh.

The last funny experience that I will share  (there are many more) was at Best Buy in San Jose. I thought surely that as a high tech store in the heart of Silicon Valley, the cashiers had seen a lot of innovative products. I waved my Nokia 3220 with embedded NFC phone and our wallet near the POS device, and the cashier screamed, “Oh My God!”, so loudly that the other cashiers and customers in line could hear him. I was so embarrassed. I thought to myself, “There must be a better way to test our software.” Here is one of the first shopping trips we video taped using our NFC sticker 4 years ago https://www.youtube.com/watch?v=fymoJAdvlWM and a summary of some of the more interesting ones at https://www.youtube.com/watch?v=CzEC40bAtwY

As we pushed to build our software, we also tried to be as customer focused as possible. I would challenge my team to forget about designing a product that they enjoyed, but to focus on what others would enjoy. We built our first NFC wallet to work without relying on the cell phone battery because back in 2005 (and some may still argue today), the cell phone battery life was very limited. In order to give consumers confidence in this new technology, we delivered the receipt to the wallet instantaneously after the purchase. We even streamed movie trailers before XG wireless service to the wallet to give customers an idea of movies so that they could make the best purchasing decision. Before a launch of our wallet, it was really slow so slow that I said we either had to change the wallet name from Blaze to something else or figure out how to make it faster.  It was difficult, but our great team figured out how to make our products fast enough to live up to our name – Blaze.

In addition to taking action, risks and being customer focused, we also invested heavily in IP. When I was starting my company in 2005, a good friend gave me a CD by @timstorey called “Big Dreams” in which he recommended protecting ones ideas.  I didn’t know a lot about patents. Then, after seeing a TV commercial with William Shatner describe using Legal Zoom to file patents, I filed my first three patents. Having a small, but awesome team of five people including myself was instrumental to filing nine patents in our first two years (in parallel to building our wallet and platform). We now have 30 patents granted, and over 120 pending patents.

Despite our technical accomplishments, access to capital has remained a great challenge.  We’ve been a #leanstartup, (before the book by the same title) not because we wanted to, but because we had no other choice. Unfortunately, institutional investors such as venture capitalists didn’t believe in our vision, so we never raised money from the venture community. We heard every response imaginable including, “I can’t get excited about this.”, “Go and get a pilot and come back.”

After launching a successful six-month pilot with MasterCard using embedded NFC phones, we were told by VC’s, “There aren’t enough NFC phones in the market.” We then tried working with large cell phone manufacturers and carriers to distribute phones in exchange for advertising and interchange revenue share. When that didn’t work, we needed a way to upgrade existing cell phones to process NFC, and our NFC sticker was born. Many companies embraced that idea and raised money off of it, and sold millions of NFC-enabling units. With the launch of our NFC sticker, potential investors responded, “Go and get a contract and come back.” We responded by securing a contract for on-deck placement by several of the largest wireless carriers in the U.S., and distributing the first version of our wallet on over 1 dozen phones (e.g. Blackberry Pearl, Motorola Razor, etc) via Get Jar, one of the first online mobile app stores (See picture below)  When we pitched to get scale capital, we heard, “Get a lot of customers and come back.”

In 2005 when I launched the company, I realized that NFC, mobile payments, and mobile apps were ahead of their time. When I think about the other companies that with a fraction of the ideas and innovation our company had, raised 5, 10, 20 times the capital as us, it makes me question the level of meritocracy in Silicon Valley. I also wonder if being a woman and African American contributed to not “matching the pattern recognition” that institutional investors cite when making investments   Fortunately, in addition to maxing out my credit cards, and taking out a second mortgage on my home, there were enough private investors who believed in our vision, supported us, and invested over $7 million to enable us to file patents and build several versions of our product. Keep in mind that this took place at a time when no blueprints existed, and we were certainly without the successful app store ecosystem that was created later. I am forever grateful to those people who supported and invested in us since they really took risks and helped us to blaze a trail.

In spite of all of the challenges, our lean team continues to develop innovative ways to enable people to pay with their mobile phone. Even though we have flown mostly under the radar, with 30 patents awarded that include NFC, non-NFC, mobile advertising, mobile ticketing, plus 120 more patents pending, we are in fact progressing with increasing momentum. Moreover, we have even received our first patent in the wake of the Alice v CLS Bank decision by the Supreme Court that ruled that abstract ideas including cannot be patented. Thus, lending further credence to our innovative accomplishments and foresight.

Lets hope that Apples entry into mobile payments and NFC also serves as a catalyst for other Silicon Valley companies to not only embrace mobile payments and NFC, but a greater diversity of ideas for current and future innovation. I think that the evolution of NFC, as well as our experience as a startup up in the space for nine years can be summarized by the following statement from Steve Glaveski’s article, Why Big Companies Choose Not To Innovate. “Today’s run and gun world of the tech startup is fueled by an ecosystem of venture capitalists and angel investors who generally expect a return on their investment after not one year, but usually five years. Investors experienced in financing early stage, disruptive technology companies understand that the lifecycle from customer discovery through to market creation and penetration takes time. In many cases, five years may not be enough to achieve mainstream success, but it is enough to gain valuable market insights, gauge commercial viability and develop enough traction to welcome a significant increase in company valuation.”

I am really excited about the future of NFC and mobile wallets offering the ability to pay, check loyalty points, view account balances, access health data, ticketing, and other use cases. Now that Apple has validated the market with Apple Pay, I doubt that anyone else will ever ask me why I’m talking about the National Football Conference in the context of mobile payments. Maybe the cashier at one of those stores I visited eight years ago will even ask me, “What app is that?” or “How would you like to pay?” the next time I make a purchase. Of course, I respond that we just want to #Blazeit!

Pictures of our first shopping trip using an embedded NFC phone at 7-11 and McDonalds both on University Avenue in Berkeley almost 8 years ago. 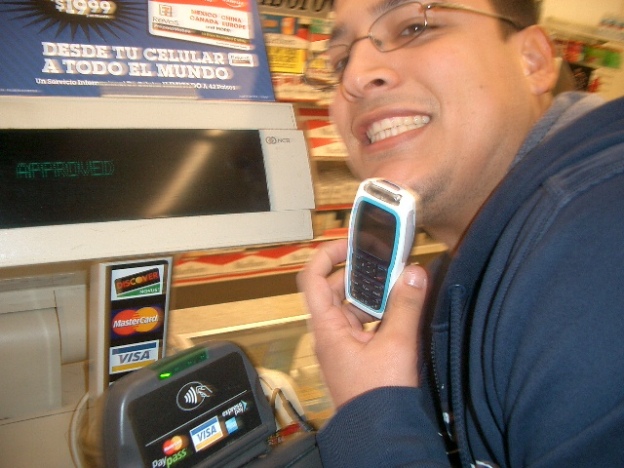 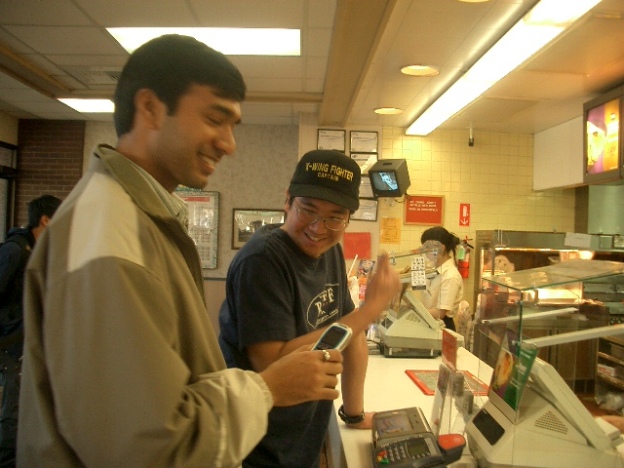 Blaze Wallet 1.0 J2ME version on Get Jar App Store  (with icons on the main menu that rotated clockwise and counterclockwise :)! )